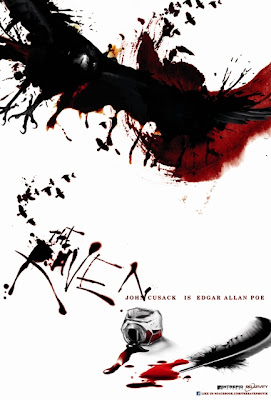 Though The Raven won't be released until March 7th, 2012, Relativity Media has released the latest trailer for the horror thriller just in time to commemorate the death of Edgar Allan Poe, which happened 162 years today!

I have to say, the trailer looks pretty good and has me excited to see the film next spring. Check it out yourself below and let me know what you think!


For more info (and some fun facts about Poe), check out Relativity Media's press release below!

When a mother and daughter are found brutally murdered in 19th century Baltimore, Detective Emmett Fields (Luke Evans) makes a startling discovery: the crime resembles a fictional murder described in gory detail in the local newspaper—part of a collection of stories penned by struggling writer and social pariah Edgar Allan Poe. But even as Poe is questioned by police, another grisly murder occurs, also inspired by a popular Poe story.

Realizing a serial killer is on the loose using Poe’s writings as the backdrop for his bloody rampage, Fields enlists the author’s help in stopping the attacks. But when it appears someone close to Poe may become the murderer’s next victim, the stakes become even higher and the inventor of the detective story calls on his own powers of deduction to try to solve the case before it’s too late.

Did You Know? Some Unusual Facts about Poe, the “Enigmatic Master of Darkness”:

• Poe wrote a fabricated news story of a balloon trip across the ocean to garner attention and publicity in New York City.

• Poe was a champion for higher wages for writers and international copyright law, as his writings were continuously published without him getting credit or compensation.

• Prior to becoming Poe’s wife at the age of 13, his female cousin Virginia acted as a courier, delivering letters to Poe’s lady loves.

• From 1949 to 2009, a mysterious figure has left a half-empty bottle of cognac and 3 roses on Poe’s grave every day on his birthday.

• Poe formulated rules for the short story, including that it should relate a complete action and take place within one day in one place.

• Poe was deeply interested by cryptography, the creation and translation of secret codes, and was very proud of his ability to translate them. He would challange readers of various publications where he worked to send him codes to decipher and, by all accounts, he seemed able to unlock the secrets to any he received.

• Poe’s lifelong dream of owning and operating his own publication never came to fruition.

• Poe met with Charles Dickens while Dickens was in the US on a lecture tour, and solicited his help with getting published in England—nothing ever came of it.

• Poe’s grandfather was an important figure in the American Revolution, contributing a large sum of his own money to outfit local branches of the Continental Army. His wife, Poe’s grandmother, personally sewed over 500 soldiers’ uniforms for Lafayette’s troops as they passed through Baltimore.

• Poe joined the Army in 1827, lying to recruiters about his age and name. He also published his first collection of poetry during this time. He achieved the rank of Sergeant Major.

• Poe experienced periods of extreme destitution, often having to burn his furniture to keep warm during the winter.

• Poe successfully sought expulsion from West Point. That being said, he was one of the top students in his class.

• Wrote poetic tributes to all the pivotal women in his life.

• Poe had two biological siblings, but all were raised in separate foster homes.

• The Poe House and Museum in Baltimore is in jeopardy of being closed in mid-2012 due to Baltimore City budget cuts. The city eliminated the Museum’s funding in 2010.

• Edgar Allan Poe was buried in Westminster Burying Ground and had no headstone for years after his death. In 1860, Poe’s relatives commissioned a small headstone that erroneously listed Poe’s birth date as January 20 instead of January 19 and was destroyed in a train accident before it made it to the gravesite.

• In 1875 Poe’s remains were dug up and moved to a memorial site to be near his family and a gravestone was placed in the wrong spot and was moved around several times. This lead people to wonder not only where Poe’s original burial spot was but also if the man who was moved to the spot by the memorial is even Edgar Allan Poe.