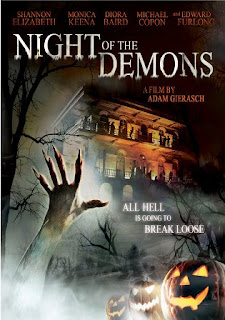 Having experienced so many bad remakes, I was expecting the worst from Adam Gierasch’s Night of the Demons remake. I thought it would be a cheap rip-off, filled with pointless gore and tons of gratuitous T&A. I was expecting to be bored and possibly pissed while watching the film because although Kevin Tenney’s original isn’t the greatest horror movie ever made, it’s still a ton of fun and is a classic in its own right.

So color me surprised when I sat down to watch the flick and it was actually GOOD! I was first grabbed by the great holiday vibe of the film. It opens with a shot of the French Quarter in New Orleans on Halloween night and zooms through the costumed crowds before focusing on trick or treaters, pumpkins and the spooky mansion where all hell will soon break loose. And the decorations! Let’s just say the set design was impeccable in creating the perfect Halloween atmosphere!

Before I get ahead of myself, the plot is as follows:

On Halloween night, a group of twenty-somethings hoping to party the night away get trapped in an old, supposedly cursed mansion and unwittingly release demons who hope to possess and ultimately kill them.

Yup, it’s pretty close to the original story, but the remake actually takes the time to develop both the story and the characters more. It also explains the demons and how they came to be trapped in the house and what their intentions are in possessing the characters. I loved the backstory on the mansion and the setting of New Orleans. The story even manages to mix in some voodoo, hoodoo and black magic into its proceedings.

Not only was the story engaging, but the characters were also likable! I loved the party-girl twist they gave Angela (played by Shannon Elizabeth) and how each of the characters was more developed than in the original. They each had complicated relationships that added to the intensity of the film. Plus, the cast of mostly-recognizable faces (Edward Furlong, Monica Keena, Bobbi Sue Luther, etc.) did a fantastic job! There are even small cameos by genre-favorites Tiffany Shepis and Linnea Quigley (who starred in the original).

Once again, I absolutely adored the set design. The Halloween party at the abandoned mansion was amazing-looking, the costumes were great, and the killer soundtrack featuring Type O Negative, Zombie Girl, 45 Grave, Creature Feature, etc., added even more atmosphere. In fact, I realllllly wish they would release a Night of the Demons soundtrack because it would make a great backdrop to my own Halloween party!

The fun party atmosphere doesn’t last long, because the cops break up the party and only a small group remains…and it is they who inadvertently release the demons. And once that happens, all hell breaks loose! Speaking of the demons, their makeup was pretty impressive. I liked how each of the demons looked different as well. The only “look” I didn’t really dig was Angela’s – on her I actually prefer the original makeup. Besides the cool makeup FX, there are also plenty of creepy moments in the film, like when the demons crawl on the ceiling in a long, dark corridor and a demon reaches out of the darkness to snatch one of the characters. And, before you ask, yes, the infamous “lipstick scene” is alive and well in the remake, with its own new spin!

Going back to the story, writers Jace Anderson and Adam Gierasch did a fantastic job explaining the backstory of the mansion, its earlier inhabitants and the demons. I appreciated the mix of voodoo, hoodoo and black magic used in the story, but also appreciated how the survivors used tools around the house to fend off the demons. I thought this detail was very clever of the writers and in the story it works extremely well.

With all that said and done, I must say that Night of the Demons is one of the most fun fright flicks I’ve seen all year. It’s not your typical, dumbed-down horror flick remake, but rather a new take on an old favorite. It is so entertaining, clever and just plain fun that I dare say it even surpasses the original!

Last year horror fans found a new Halloween horror classic with the release of Trick ‘r Treat; this year Night of the Demons is the new Halloween classic!