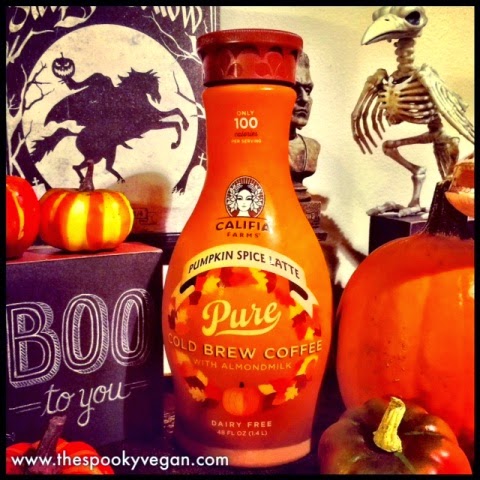 Califia Farms just announced their new Pumpkin Spice Latte Cold Brew Coffee earlier this week, and I already found it at stores yesterday! This is another one of those “holy grail” vegan items that have been released this autumn season, and we certainly are being spoiled this year! I am so glad Califia Farms has released this, since Starbucks' Pumpkin Spice Latte is not vegan and making your own is kind of a pain. This is the perfect treat of cold brew coffee mixed with Califia Farms’ delicious almond milk and warming pumpkin spice!

I found mine at Whole Foods (the one at The District off Jamboree in Irvine/Tustin for those that are local). I can’t recall exactly how much it cost, but it was around $3.99 - $4.99. I had to hunt for it in the store - I didn't see any with the other Califia Farms almond milk products in the refrigerated milk section, but rather the Pumpkin Spice Latte bottles were with the grab and go meals towards the front of the store by the hot food stations. This might just be this particular Whole Foods, though, which has a tendency to stock stuff in weird places.

Anywho, I rushed home (you should see how I drove! Yikes!) so I could try this pumpkin-y goodness! When I first popped the top, it smelled heavenly! In fact, it smelled so delicious that I took a swig (and then another, and then another) straight from the bottle! I just couldn't wait/be bothered to get a glass.

As for the taste, oh my!! It tasted like the most delicious pumpkin pie in liquid form! I've attempted to make my own pumpkin spice lattes before, and they just never turned out right. Well, thank goodness for Califia Farms, who has answered my prayers for a delicious vegan pumpkin spice coffee drink! It was soooooo much better than the attempted PSLs I've made myself!

The consistency of the drink was rich and creamy, and a little thicker than Califia Farms’ regular almond milk. I drank this easily on its own (I had to be careful to restrain myself because I wanted to drink the whole bottle), but I think it would also be really good poured into coffee and used as a creamer (I gotta try to make this stuff last, because I’m going to be devastated when it is no longer available!).

If you love pumpkin flavored vegan things, autumn, and coffee, I love you, but also you NEED to go grab at least a couple bottles of Califia Farms’ Pumpkin Spice Latte! It is like drinking pumpkin pie with a yummy coffee kick!

Califia Farms’ Pumpkin Spice Latte is available now at Whole Foods, and will be available at other stores soon!