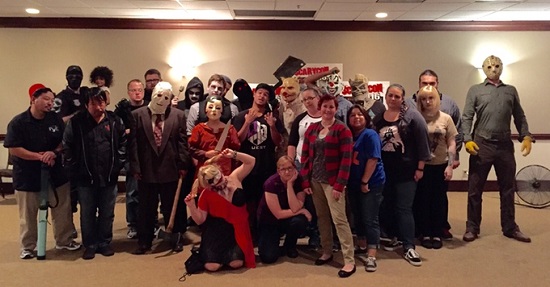 Ok, how does this sound for an awesome horror movie premise:


Everybody Dies at ScaryCon is the story of Ed Stryker, a horror director who made a huge splash in the independent film renaissance of the early 90's with his grungy, black and white, zero budget movie, Machete Betty.  Now, Ed is a shell of the man who dreamed of entertaining the world through his films.  The passion is gone and the flame's died down.  Even though the quality of his films deteriorate with each release, he still finds loyal fans eager to meet him at the annual horror convention, ScaryCon.  But this year will definitely be his last. After a long night in the hotel bar, Ed discovers that the patrons sitting next to him are no longer the typical convention fanboys and cosplayers.  They're the blood-thirsty monsters from his movies.  They're alive.  They have their customary machetes and chainsaws.  And they're pissed.


I don't know about you, but I want to see that movie get made! To add to that amazing premise is the "art imitates life, life imitates art" way this horror movie came about. Filmmakers Jeff Smith and Sara Parrell (who made my much-loved Stupid Teenagers Must Die! [my review] and also started Orange County's only horror film festival, the Everybody Dies Horror Film Festival) explain:


So how did this short film come to be?  Well, it's kinda complicated. First, we had a script for a feature film called Everybody Dies at ScaryCon which was loosely based on our experiences from attending conventions to promote our first film, Stupid Teenagers Must Die! While we tried to raise money for the ScaryCon feature, we created a horror film festival that "lived in the same world" as our script and called it the "Everybody Dies Horror Film Festival." The festival's malicious mascot was a character straight from the ScaryCon script called Machete Betty. Three years later, we wrote a short film (the one we're making now) loosely based on our experiences from the film festival which was based on the feature script that inspired the festival.  The short is also called Everybody Dies at ScaryCon and, while it focuses on brand new characters, an old favorite named Machete Betty is in this story, too. Guess it's really not that complicated at all.  It makes perfect sense, doesn't it?

Makes sense to me, and adds to the intriguing idea for Everybody Dies at ScaryCon! I think many horror fans can relate to the horror convention tropes that will no doubt be covered in the film, but I also think the idea for the film is a really novel, unique and fun approach! I also know that horror fans will be in good hands with Jeff Smith and Sara Parrell behind the film. They'll not only give us a great story, but interesting characters and lots of gore and fun along the way!

However, the film needs your help to get made. Please support unique, indie horror and donate what you can so we can see this rad film come to life! There are some great perks for donating as well, including t-shirts, posters, VIP tickets to the premiere, roles in the film, and much more! There is even a "The Preventative Casting Reward" where you donate and then get to name a famous person you DON'T want in the film! Genius!

So far, I am loving everything about this horror movie and I think you will too! So let's help get this funded so we can get a horror movie made that horror fans deserve! And if you can't donate, please spread the word by sharing their campaign! Let's get this out there to horror fans far and wide!

For more info and to donate, check out their Kickstarter page!
Posted by Sarah E. Jahier at 9:45 AM