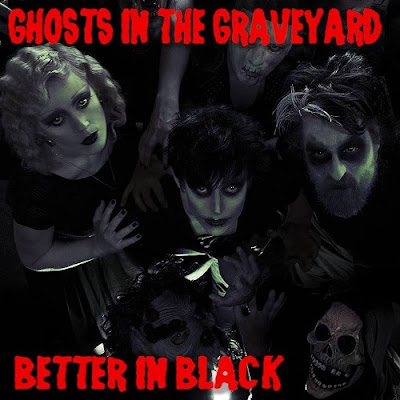 A new band that has recently caught my attention is Ghosts in the Graveyard, who mix goth, shock rock and electronic musical styles to come up with a grand, cinematic style all their own! The band was founded by vocalist Byron C. Miller and is rounded out by his wife Shelly Miller on vocals/keyboard and Paul Morgan on guitar. They are inspired by all things spooky, musical acts like Alice Cooper and Depeche Mode, John Carpenter's movie soundtracks, Halloween, and, of course, horror movies (which Byron has directed a few of)!

In an interview with Famous Monsters, Byron explains "I wanted this band to be cinematic, haunting, rocking, and meaningful." While Paul describes their sound as "epic, electronic-tinged rock perfect for driving through Michael Mann’s vision of 1980s LA at night with a trunk full of dead bodies." And then Shelly Miller chimes in, "At the end of the day, this is a fun band that really captures that Halloween feeling we all have inside. We all have that, right?" I couldn't have described them better than that!

Check out their bloody debut video of their dark anthem "Better in Black" below:


Their cinematic style is really killer, and I can't wait to hear more from Ghosts in the Graveyard!

Purchase "Better in Black" on iTunes or Amazon!

For more info, visit Ghosts in the Graveyard on Facebook or on their site!
Posted by Sarah E. Jahier at 4:30 PM