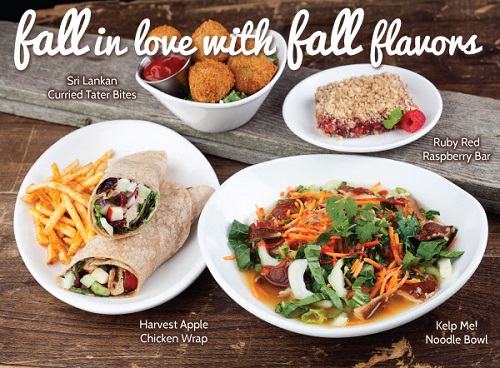 Native Foods unveiled their new fall menu for 2015 recently, which, as shown above, includes a new Harvest Apple Chicken Wrap, a Kelp Me Noodle Bowl, Sri Lankan Curried Tater Bites, a Ruby Red Raspberry Bar, and Apple Cinnamon Chai'der. To me, these dishes don't scream "autumn" at all, but I decided to give some of them a try anyway. 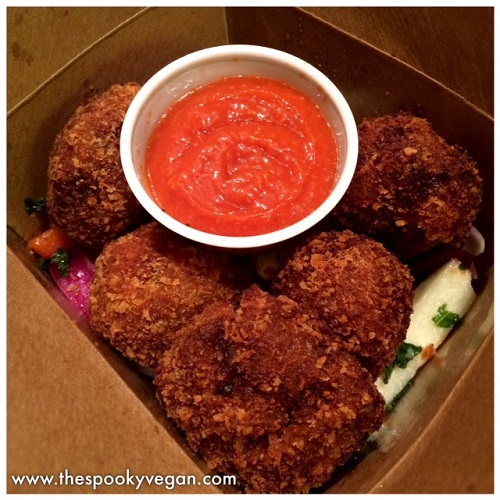 Sri Lankan Curried Bites - crispy on the outside...

The one seasonal item that intrigued me was the Sri Lankan Curried Tater Bites. These looked scrumptious! They are curried potatoes, onions, carrots and turmeric seasoned seitan rolled in panko bread crumbs served with Sriracha sauce and a kale-jicama slaw. 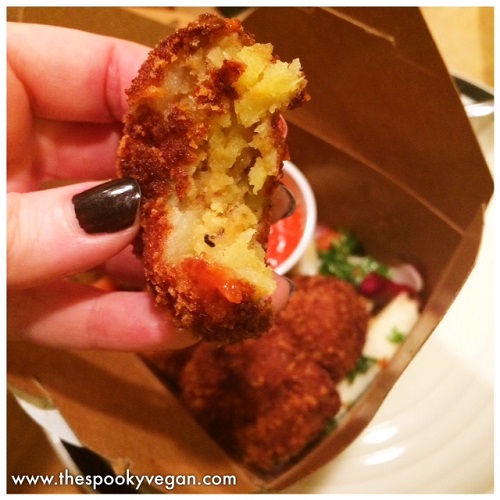 ...filled with savory potato goodness on the inside!

I got the bites to-go, so I can't speak for the presentation, but I can say that they were delicious! The bites had a great texture - they were crispy on the outside and soft and fluffy on the inside, with a fantastic savory flavor. And that Sriracha ketchup reminded me of curry ketchup; it was so good and with a nice kick! These were $6.99 and I would gladly order them again! 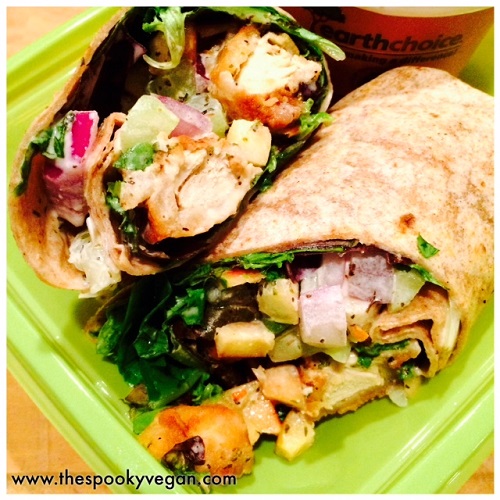 I also tried the Harvest Apple Chicken Wrap after it was recommended to me by the server over the Kelp Me Noodle Bowl (I was told the bowl wasn't that filling). The wrap is sliced Granny Smith apples, dried cranberries, herb mayo, cucumber, red onions and mixed greens in a whole wheat tortilla. It comes with your choice of side.

I realllllly wanted to like this wrap, but as soon as I got home (probably 15 minutes after I picked it up), it was already soggy. Not only that, but the flavors themselves just weren't good...apples and onions? Blegh. The one thing that was okay in this wrap was the chicken, which I think is their house seitan. This was $10.59, and I wouldn't order it again.

Also, I want to mention that I ordered their potato salad as a side, because I usually love their potato salad. This time, however, it was so oily I could barely eat it. Really disappointing considering that the wrap was mediocre too.

Native Foods' fall menu is kinda bizarre and doesn't really feel like autumn flavors to me. The one menu item that sorta sounded fall-ish, the Harvest Apple Chicken Wrap, was a bad clash of flavors and a soggy mess. However, their Sri Lankan Curried Tater Bites were insanely good and worth checking out! And I still would like to try their Kelp Me Noodle Bowl and Apple Cinnamon Chai'der!

What do you think of Native Foods' fall menu?
Posted by Sarah E. Jahier at 10:00 AM